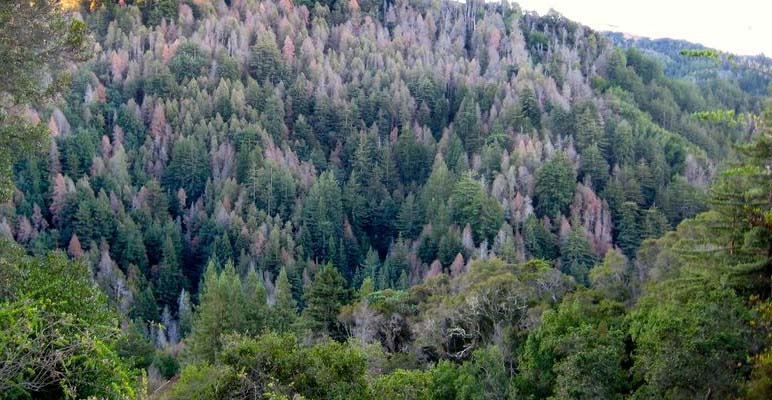 Sudden Oak Death is a pretty intense name for a plant disease, but given the repercussions it has had, I think it’s a pretty fair title. From the mid-1990s to today, Sudden Oak Death has all but obliterated California and Oregon’s oak tree species, killing millions of Coast Live Oak, Canyon Live Oak, California Black Oak, and Shreve Oak. Despite its name, the disease unfortunately impacts other species of tree and shrub as well (such as the Tanoak, California Bay Laurel, Douglas-fir, and Coast Redwood to name a few).

Phytophthora ramorum is the plant pathogen known to cause Sudden Oak Death, as well as Ramorum blight, which impacts twigs and foliage of ornamentals such as Viburnum and Rhododendrons. The origins of the disease are unknown, and it is easily spread through rain, human and animal activity, as well as spores in the air. Right now, our best way of fighting it is through early detection (especially in nurseries, which often ship out plants to other parts of the country, potentially spreading the disease), and proper disposal of infected plant material.

An important part of arboriculture is staying in-the-know on plant diseases like Sudden Oak Death. New diseases have the potential to threaten established ecosystems. Changing the species composition of a forest undoubtedly impacts food sources for local wildlife, water quality, erosion, and changes the frequency in which forest fires occur. California has experienced this first hand, as 60,000 acres were impacted in 2015. 2016’s spring precipitation has certainly not aided the fight against Sudden Oak Death, and increased spore activity was anticipated. Impacted areas in California and Oregon now have to deal with hazardous dead trees and an increased risk of fire, as well as decreases in property value due to the negative aesthetic impact.

So why should Virginian’s worry? Brett Tyler, a Virginia Bioinformatics researcher and professor at Virginia Tech, says it best:

“Sudden oak death thrives in cool and moist West Coast forests…Because some Virginia forests and the Appalachian highlands have similar climates, they are in danger of being invaded by the pathogen.”

Our sincerest hope is that the spread of Sudden Oak Death does not extend to our Virginia Forests, and is eventually controlled (if not eliminated) in California and Oregon. Fortunately, concentrated efforts have been made and the ornamental plant industry is very careful, making regular inspections for any signs of the disease to help curtail the spread.