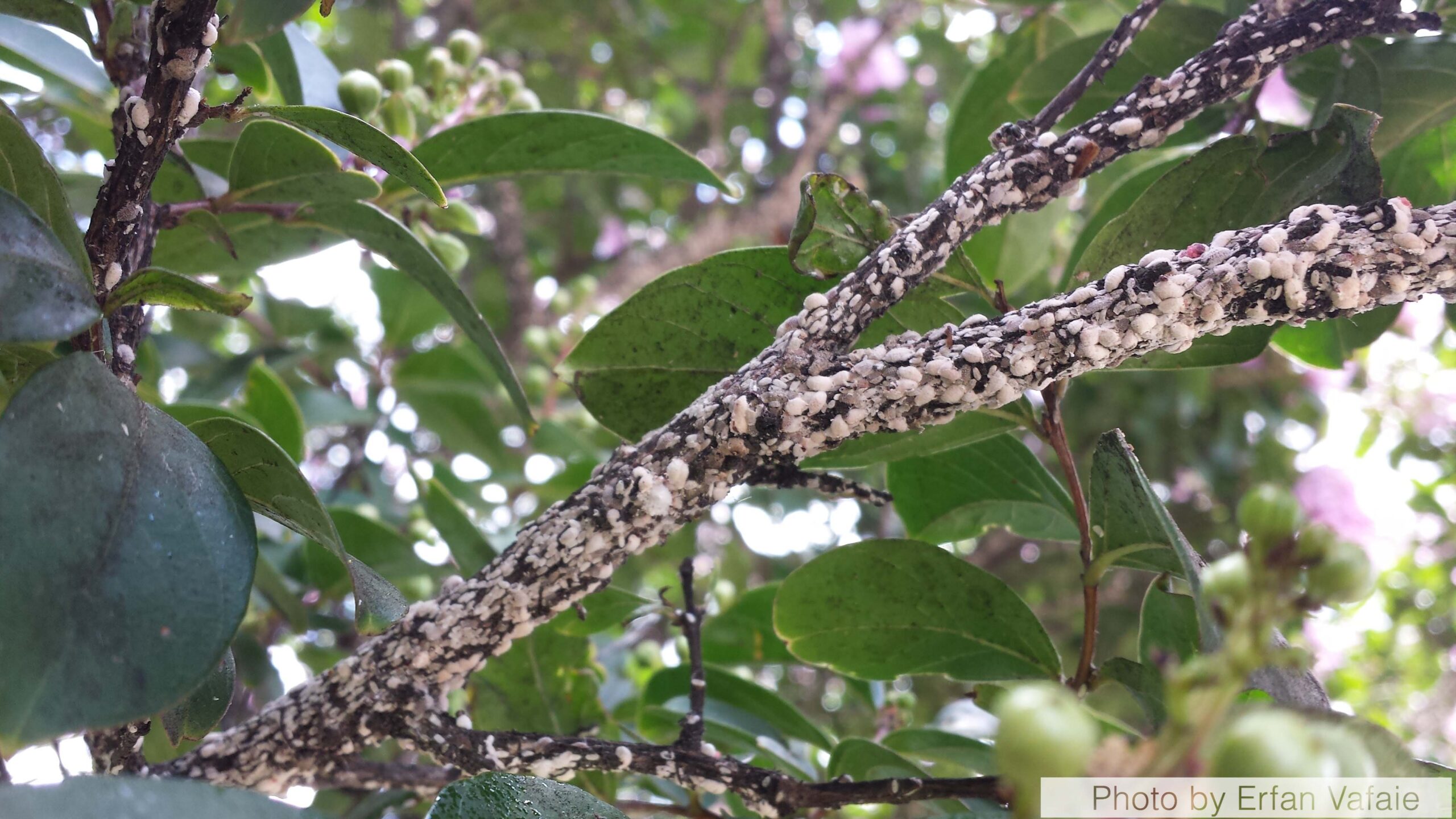 Crapemyrtle bark scale is officially present in Virginia, spotted for the first time in Virginia Beach. Virginia has now joined the ranks of 12 other states in which this insect is unfortunately found. Considering how much of a staple crapemyrtles are to so many landscapes in Virginia, this unsightly insect infestation is bound to show itself in areas beyond Virginia Beach soon, posing a threat to many people’s landscape investments.

Large infestations are easy to identify, as this is the only bark scale in the U.S that impacts crapemyrtles. Not to be confused with a heavy aphid infestation, crapemyrtle bark scale will also result in the presence of black sooty mold on the surface of the tree’s bark. Other identifying factors include small, Q-tip like white/light gray spots on trunks and small twigs, which are actually part of the female insect, under which the pupae grow.

Methods of control include: Washing the trunk with a mild soap and water solution, winter applications of dormant oil to the bark, application of insect growth regulators, and systemic insecticides applied as a soil drench. Natural predators are also helpful in managing crapemyrtle bark scale; however, it is unlikely that any natural predator would be able to reduce a heavy infestation to a manageable level on their own.

According to the Virginia Nursery and Landscape Association, crapemyrtle bark scale does not appear to be easy to control, but we are hoping that treatment efficiency will improve as experience with the pest increases. It is most likely that long distance spread of crapemyrtle bark scale is due to infested nursery stock, but short distance spread is also possible, as the male insects are capable of short-distance flight. Those either doing their own pruning, or hiring a professional must also be wary, as spread may also be possible through improper disposal of infested pruning waste.

Crapemyrtle bark scale alone may not kill a crapemyrtle, but it is very unattractive as well as stressful for the tree. The combination of a plant disease or insect infestation, paired with secondary invaders that take advantage of the plant’s weakened state is normally the straw that breaks the camel’s back. If you think you have this issue on your property, we are urging you to give us a call! Our Consulting Arborists can meet with you to discuss getting your crapemyrtle back to its best, but also to help track the spread of this new insect throughout the state.