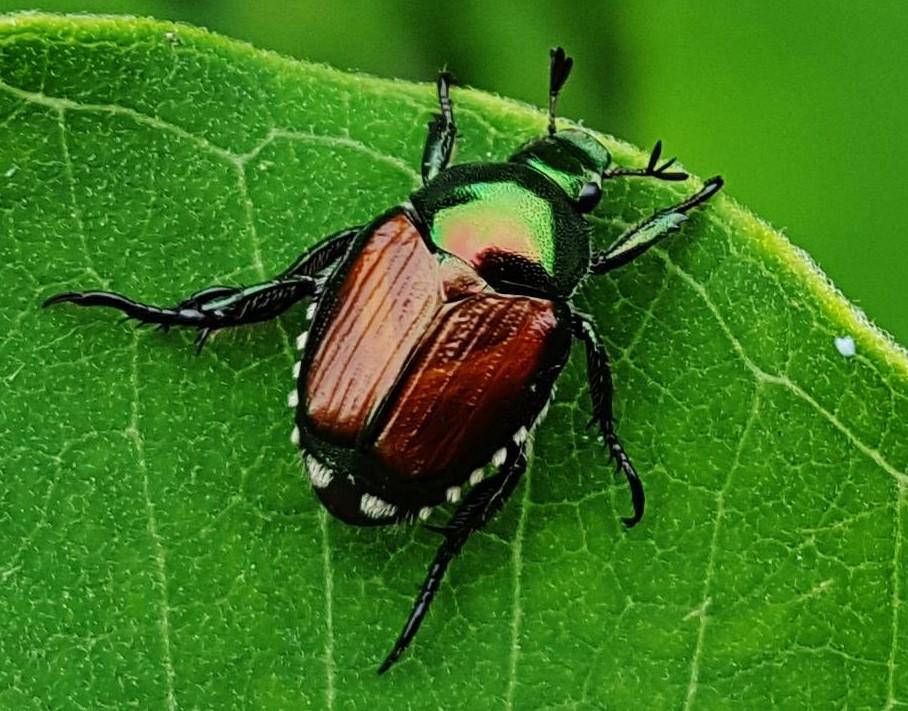 Five Facts about the Japanese Beetle

For some, the appearance of a Japanese Beetle swarm wouldn’t register as much more than a nuisance, but for others – particularly growers and home gardeners – they can be harbingers of doom. Capable of defoliating nearly 300 different host plants, including roses, birches, elms, and many varieties of fruit trees, they are a truly vicious pest.

Adult beetles are approximately a half-inch long, with metallic green, coppery bodies. Their full life cycle takes a year, and adults tend to emerge in June. But their destructive behavior starts much sooner. Read on to learn five important facts about the Japanese Beetle.

Even the babies are destructive

Few insects are as pervasive a pest as the Japanese Beetle. Adult beetles will lay their eggs in June and July, and by late September, the hatched grubs (larvae) will be actively feeding on grass roots with an intensity that can destroy a lawn. In effect, Japanese Beetles can present a formidable threat to your landscape at all phases of their lifespan.

Traps are ineffective in preventing damage to your plants

Traps are a popular – and self-defeating – way of handling Japanese Beetle infestations. They work by releasing a pheromone that will attract adult beetles. While this may sound like a solution, traps will actually attract more beetles than they capture, meaning they effectively operate as an “open” sign for your unwitting landscape buffet.

They do not feed alone

Traps are not the only attractant to your landscape. Once an adult Japanese Beetle begins feeding, it will emit a “congregation pheromone” which will attract more beetles. This is why they are often seen feeding in large groups.

But hey, life is short

It’s fair to note that if your adult lifespan was a mere 30-45 days, you might also spend more time socializing and sharing meals with friends. Of course, 30-45 days can be a considerable amount of time when it comes to the impact on a plant, and even with a short life-span, there will always be another beetle to take an individuals’ place.

Despite their voracious appetite, they can be picky eaters

The good news is that despite their robust feeding habits, there are a few plants that they prefer less than others. For instance, they do not seem particularly partial to boxwoods, redbuds, or magnolias. While not a sure-fire method for control, selecting plants that are not a part of their preferred menu will help to naturally manage their overall impact on your landscape and turn them from harbingers of doom to mere nuisance.

If you have Japanese beetles present on your landscape, Arborscapes can help! You can choose foliar treatments that target the active adults as they feed on your trees and shrubs. If you have plants that are susceptible to Japanese beetles, give us a call.